President Barack Obama signed into law a bill allowing continued sales of kids’ off-highway, according to the American Motorcyclist Association.

The law (H.R. 2715) was introduced by Representatives Mary Bono Mack (R-Calif.) and G.K. Butterfield (D-N.C.). With its passage, kids’ off-highway vehicles (OHV) are now exempt from the Consumer Product Safety Improvement Act (CPSIA) of 2008, referred to as the lead law. 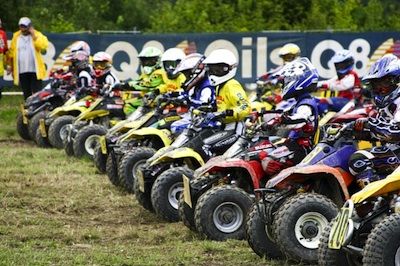 This act banned the making, importing, distributing or selling of products marketed for children 12 and under containing more than a precise amount of lead accessible for ingestion. To the chagrin of many families and children, kids’ dirtbikes and all-terrain vehicles (ATVs) were included in the ban.

Prior to our lawmakers’ summer recess, H.R. 2715 cleared the House by a 421-2 vote on Aug. 1 and earned Senate approval by unanimous consent the same day.

The hard-fought victory results from the exhaustive efforts by the AMA and its associated organization, the All-Terrain Vehicle Association (ATVA), their members and countless advocates for responsible OHV recreation. Their determined efforts totaled roughly three years.

“Federal legislators deserve a lot of thanks for their tireless efforts, especially U.S. Rep. Denny Rehberg (R-Mont.), U.S. Sen. Amy Klobuchar (D-Minn.) and all the other lawmakers who supported an exemption,” said AMA President and CEO Rob Dingman. “Hundreds of thousands of parents, kids and motorcycling club members responded to AMA calls for action to contact their elected officials and their efforts, along with all those volunteers who circulated petitions and took other actions, brought this issue to the attention of Congress and turned the tide in our favor.”

Dingman further credited the thousands of letters, emails and telephone calls that were made to Congress, convincing lawmakers to exempt OHVs from the lead law.

“I’m also convinced that the AMA Family Capitol Hill Climb held on May 26 played a major role, since it put a human face on the issue by showing lawmakers the kids and families who are suffering because of the CPSIA,” he said. “I want to extend a very special thanks to Malcolm Smith, a member of the Motorcycle Hall of Fame, who brought a lot of attention to the unfairness of the lead law when he hosted a media event at Malcolm Smith Motorsports and sold some youth OHVs as a symbolic gesture to protest the law.”

Dingman also gave credit to the Motorcycle Industry Council and Specialty Vehicle Institute of America, representatives of the motorcycle and ATV industries, the trade media as well as Kirk “Hardtail” Willard, president of the Motorcycle Riders Foundation.

Since 2009, the AMA was the vanguard of this challenge, maintaining the exclusion of child-sized motorcycles and ATVs from the CPSIA. The association tirelessly lobbied on Capitol Hill, organizing campaigns to encourage riders and parents to reach out to their federal lawmakers and other decision-makers to exempt kids’ OHVs from the CPSIA. The AMA magnified these efforts through its “Kids Just Want to Ride” campaign.
The North Georgia Parks and Recreation Department maintains OHV trails for children and their families.

Before embarking on an outing, be sure to go over riding tips with your children or even better, enroll them in a safety course in one of the great classes in the Metro Atlanta area designed specifically for kids. Invest in quality safety gear that is appropriate for small children. It is not a good idea to let them go out in ill-fitting adult-sized helmets and gloves.

Lastly, make sure that when taking any recreational tours with any automobile that you buy auto insurance in case your vehicle sustains any damage while off-road or worse, you or your child are injured. Should you or a member of your family sustain an injury while operating a recreational off-highway vehicle, give us a call. If the injury was caused by the negligence of others or certain road conditions, you could be eligible for compensation. We review your entire situation and circumstances in detail and then discuss the case with you free of charge with no obligation.

From our main office in Gwinnett County, we serve clients from offices in Buckhead and the Perimeter and represent clients throughout Atlanta and Georgia including Fulton County, Cobb County, Forsyth County, Dekalb County, Walton County, Jackson County and the cities of Lawrenceville, Marietta, Sandy Springs, Roswell, Decatur, Johns Creek, Lilburn, Snellville, Duluth, Lithonia, Loganville, Grayson and Norcross. Contact us anytime toll-free at 1-866-972-528 or in Atlanta at 770-717-5100.