A tragic motorcycle crash in Cobb County is currently under investigation. Marietta Police have the important task of determining precisely what happened when a biker was killed after his bike hit a Cobb Community Transit bus last week. The bus was not carrying any passengers at the time. We can only hope that when bike accidents […] 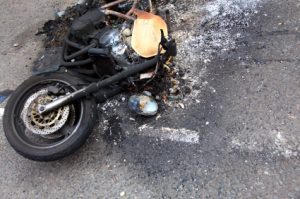 A tragic motorcycle crash in Cobb County is currently under investigation. Marietta Police have the important task of determining precisely what happened when a biker was killed after his bike hit a Cobb Community Transit bus last week. The bus was not carrying any passengers at the time. We can only hope that when bike accidents like this happen, the outcome is greater safety for bikers. Although the facts about this fatal bike crash are not yet determined, there are some witness reports. Some witnesses reported that the motorcycle accelerated before the crash, but at this point police do not know which vehicle had the right of way. It also appears that the location of this accident is known to police to be dangerous. Enforcement has been recently increased due to the known problems with the road in this area. Apparently, speeding is an issue there as is jaywalking, both of which the police have been trying to manage.

This tragedy took place in the afternoon on which there was good visibility. The driver of the bus was apparently driving in the westerly direction and was making a left turn into the transit depo there. The bike struck the back area of the bus and tragically burst into flames, killing the rider. Georgia Good Samaritans heroically tried to put out the fire with their own jackets, but they were unable to do so. As noted previously, the rider may have accelerated before hitting the bus or the bus may have needed to wait before turning. The bus driver was able to get out of the bus after the crash and cried out for help. She was taken to the hospital, but her condition is unknown.

When evaluating the responsibility for a fatal motorcycle crash, which could lead to a lawsuit for wrongful death, many factors must be considered. In cases involving a governmental entity or transit authority, it can be more complicated for injured parties to recover. Municipalities and other governmental entities often come under a doctrine called sovereign immunity, which provides greater protection from liability for those entities. This does not mean that a lawsuit cannot be filed or successfully prosecuted against such entities, it just requires an evaluation of the facts of any particular accident or injury to determine the cause and the potential liabilities.

Similarly, there is more limited liability to governmental entities for the roads themselves. This doctrine is found in Official Code of Georgia section 32-4-93 which governs liability for defects in public roads. The provision protects municipalities when there is no negligence in either constructing or maintaining the roadway. This also applies when there is no actual notice of a defect or the defect is so recent, the municipality could not have known about it. In this situation, the stretch of road in which the rider lost his life is now known to be problematic and many have been injured or killed there. Part of the investigation of the crash in a wrongful death action, should include whether any governmental entities bear some responsibility for the condition there.

If you or a loved one have been injured in a motorcycle crash, you need guidance and help to get the law on your side. Scholle Law can help and we welcome your call for a free evaluation of your case.