Several motorcycle crashes over the past two weeks in the Atlanta area have served to remind us all of the dangers of intersection motorcycle collisions and other potential for fatal collisions as the weather improves and more riders are out on their bikes. We need everyone to stay safe, but spring has already seen fatalities that are leaving families and friends […] 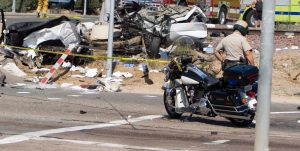 Several motorcycle crashes over the past two weeks in the Atlanta area have served to remind us all of the dangers of intersection motorcycle collisions and other potential for fatal collisions as the weather improves and more riders are out on their bikes. We need everyone to stay safe, but spring has already seen fatalities that are leaving families and friends grieving. Just this past week, two vehicles, one a motorcycle and one an pick up truck collided in an intersection in Gwinnett County. Reports of this collision indicated that the truck driver, who was attempting to make a U-turn, drove into the bike’s path. The rider did not survive this crash. And another collision in Gwinnett between a car and a bike near the Mall of Georgia occurred this past week, with potential injuries that have not been reported at this time.

Another rider was fatally injured after a car attempting to turn left in a Cobb County intersection was struck by the bike. The driver and passenger in the car were not seriously injured, but were treated for the injuries they did sustain.

These collisions and fatalities are not only tragic, they are a reminder that spring is here and that riders must take every precaution, particularly at intersections, for their safety and security. At least two of the fatal crashes these past two weeks have involved intersection collisions. Both of those appear to have involved another vehicle attempting to make a turn within an intersection and colliding with a bike passing through that same intersection.

We have posted often about the dangers for motorcycle crashes within intersections. Although it is difficult for a rider to anticipate the unexpected actions of a car or truck that fails to yield the right of way when a bike is passing through, the dangers of a collision and fatality are statistically higher than between two “caged” vehicles. Riders can protect themselves by taking several steps as they approach and ride through an intersection.

Anticipating that other vehicles might not see you is important. To help other vehicles see you, it is helpful to wear clothing that is brightly colored or white. It is important to avoid riding between other vehicles at intersections. Although this is legal in some states on the open road, doing this in an intersection is dangerous. Defensive driving is key for riders. That means making sure that you are not riding in a vehicle’s blind spot. Slowing down to look around through intersections is also an important consideration. Some recommend coming off the bike throttle and coasting in intersections and slightly activating brakes to take a bit of speed off and allow for more control in case of an emergency.

Here at Scholle Law we are dedicated to helping those who have been injured or harmed in a motorcycle crash. We have represented many riders and their families with care and compassion. If you have been injured in a bike crash, please contact us for a free consultation on how we can help you and your family with legal rights and other support.