As noted in part one of this post, in my view, we need better licensing for safe riding. One key to better licensing would be an “on road” skills test. Europeans use a series of procedures that include an actual on-road test with a test examiner following the prospect motorcyclist on a set route. Through […] 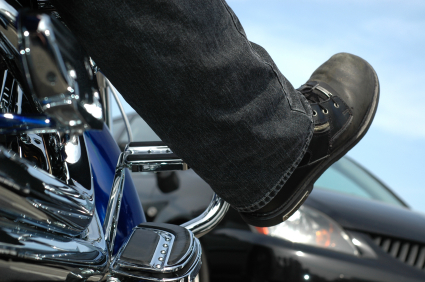 As noted in part one of this post, in my view, we need better licensing for safe riding. One key to better licensing would be an “on road” skills test. Europeans use a series of procedures that include an actual on-road test with a test examiner following the prospect motorcyclist on a set route. Through a communication device in the helmets, the examiner instructs the prospect on what to do.

Compared to our current “skills” test, this is much more comprehensive because it puts the rider in actual traffic or at the very least on real streets. In Europe, the procedures are so tough that over 50% of applicants fail a “module” of the test the first time. “Module” is the breakdown of the skills test from various displacement sizes of the motors as you advance in experience. This procedure weeds out those that are serious about licensing and those that just want to play on two wheels.

I believe that licensing must be that tough in the United States. Without this, the fatality and injury numbers will only increase.

When I began riding motorcycles 29 years ago I didn’t even know that the Motorcycle Safety Foundation (MSF) even existed. In their 39-year history, they have trained over 4.5 million riders for the road. This organization is vital to the future of motorcycle licensing and I believe that they must be included in the procedure for obtaining a motorcycle license across the country. These well-trained riders could be exploited as they are certified by MSF and could assist with better licensing and testing.

It’s not a popular idea. Rather than focus on more stringent licensing, experienced riders believe that we must do something about the “cagers” (people in automobiles). Honestly, motorcyclists are so outnumbered that we can’t do much about “cagers” other than raise the minimum driving age and produce televised and radio public service announcements. We would certainly have to make a grandfather clause for riders already licensed. It’s the new rider we must train and here is the plan I believe could help.

First, I would propose new licensing hearings should commence at NHSTA and would bring in the following people to speak: The President of the American Motorcyclist Association (AMA), the President of the Motorcycle Safety Foundation, the Presidents of the three largest underwriters of motorcycle insurance in America, and the commissioners of all the state DMVs.

I would lay out a system of licensing procedures that would include all prospective motorcyclists. It would start with a written exam that has a 50% chance of failure on the first try. If a rider does pass then he or she would be required to take the DMV parking lot test before being issued a “provisional” (MP) license. The rider would be limited to an under 40 hp (horsepower) motorcycle for one year or 5000 miles of riding documented by a data logger. The data logger’s sole purpose is to account for mileage- nothing more.

When the rider completed a year or 5000 miles, the rider would be required to return to take the written exam again and pass it with a score that is a minimum of 10% better than that rider’s previous exam unless a perfect score were obtained on the first test. The rider would have to take a first “on road” test on a 10 mile route in different driving scenarios that include being in moderate traffic congestion. When the examiner believes the rider has accomplished this, he or she can then obtain the M class permit and ride the bike of his or her choice.

None of this is popular with the current riding crowd. However, we must ready riders for today’s modern traffic patterns. The Motorcycle Industry Council (MIC) would argue that this will hurt sales. I would argue that the changes to tougher procedures in Europe a few years ago hardly hurt overall sales. If that is their worry, then now is the time to make the changes since sales overall are off by nearly 45% from where they were just four years ago. Additionally, it would be hard for people to argue against the fact that with better training, more public service announcements and harder licensing procedures, rider insurance rates may well decrease.

Riders are the most vulnerable people on the roads. Other than protective gear, there is not a protected element for motorcyclists versus the auto driver. This may sound like overkill, but when you have seen as many unskilled and skilled riders get injured or killed on motorcycles as I have, you tend to think there are solutions. We must be proactive for the future of motorcyclists and this is a step in that direction.

About the Sponsor of G2W
The Law Offices of P. Charles Scholle, P.C., represents motorcycle riders and their families in serious personal injury and wrongful death cases. We sponsor Georgia Brain Injury Lawyers Blog for the riding community, because we know how much Georgia riders love their bikes and we want them to be safe and ready to ride. Please contact our law office at any time for a free and private consultation at one of our conveniently-located Atlanta area offices. We understand how much you love to ride and we want to help you if you need support after and injury or accident.