Over this past year, we have written about the many advances and stories of recovery after a brain injury. Here in Georgia, we know that March brings the promise of spring time and longer days. March is also brain injury awareness month, something that is very important to us as Atlanta brain injury lawyers. The […] 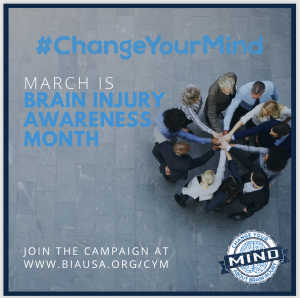 Over this past year, we have written about the many advances and stories of recovery after a brain injury. Here in Georgia, we know that March brings the promise of spring time and longer days. March is also brain injury awareness month, something that is very important to us as Atlanta brain injury lawyers. The Brain Injury Association of America (BIAA) is the organization that has worked on bringing awareness and education about brain injury. From 2018 through 2020, the BIAA is focusing the awareness campaign on helping all of us learn about traumatic brain injuries (TBI),  their impact on the lives of those who suffer from them and what can be done to help injured victims and their families. The campaign is targeted in three key areas:

Fortunately, right here in Georgia we have an  affiliated organization to the BIAA, the Brain Injury Association of Georgia which is sponsored in part by Atlanta’s own Shepard Center. These organizations have helped those who are dealing with TBI, their caregivers and the public in countless ways. We urge our readers to visit these sites to learn more about TBI and what every one of us can do to raise awareness and to support research and rehabilitation efforts.

This past year, one of the most inspiring stories we brought to readers was of a young lawyer in California who sustained a life-changing injury when he fell through the roof of a building. He had been out on the roof to look at the view and took a step that altered his life forever. He fell into an unseen shaft that dropped him 40 feet. He was helped by scientific advances in brain injury, his expert neurosurgeon and his own courage in what are major rehabilitation efforts. His story is just one of millions for those who have sustained a brain injury in an accident, playing a sport or in military service. These are just examples of the ways in which TBI can occur.

Right now across our country several million people are dealing with brain injury of some type. This month we focus on the efforts of brain health advocates who seek to support those who are dealing with such an injury and the caregivers who help them. In recent years, the invaluable resources of the BIAA and BIAG have provided greatly needed information for victims, their families, caregivers as to how to care for those in recovery. They have provided camps for adults who share time with others who are recovering. They provide a community of support with educational materials and resources for those impacted to get the help they need.

As Atlanta brain injury lawyers, Scholle Law has represented and supported those injured and their families to recover after an accident involving a TBI. These injuries can be mild to severe. But even a “mild” injury can be life changing, with a concussion for example that causes memory loss, concentration issues, headache, dizziness and other symptoms. We know the challenges that both the injured and their families face and we are grateful to have the expertise to help them. We applaud and support the efforts of all the dedicated doctors, nurses, caregivers and families of those who have sustained a TBI. We value and support the many TBI patients who are in a position to courageously take steps each day to recover as much function as possible.